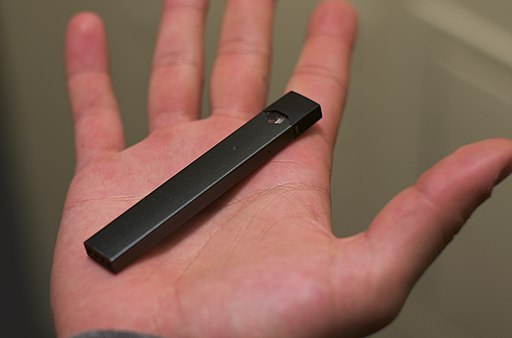 Over the past five years, the United States has seen a gigantic spike in nicotine addiction in young people, almost erasing the many years of progress made in massively reducing the amount of teenage smokers – and the responsibility for this new epidemic can perhaps be traced back to one company, one of the most popular names in the e-cigarette industry – JUUL.

Vape pens, e-cigs, or simply, ‘vapes’ – these small, compact devices, and their packs of flavored vape cartridges, often unassuming to those not in the know, have made billions of dollars by marketing nicotine to an audience that had been slipping away from tobacco use for decades, transforming it into (while often publicly denied) the target market for these devices. Previous to JUUL, e-cigarettes had often been marketed solely as a healthier replacement for those already addicted to nicotine, or as expensive modular boxes for enthusiasts – but JUUL changed that. Smaller and more discreet than ever before, these e-cigarettes were marketed as a more “fun” alternative to smoking, utilizing easy to use packs of vape cartridges with fruity flavors that barely seemed like smoking cigarettes at all. However, the JUUL’s small size, appearance, and perceived “coolness” made it all too perfect for a demographic other than the adult smokers their marketing was supposedly targeting: high school students.

How JUUL has Made Nicotine Appealing to Teenagers

The JUUL’s small, easily concealable design made it simple for students to sneak the devices into schools – anyone who has entered a high school bathroom after 2015, the year the device hit the market, can attest to that. For a generation previously less likely to consume tobacco products than any other, vaping quickly became an acceptable, even socially encouraged activity.

Almost none of these younger users would buy the tobacco or cigarette flavors of the cartridges, known as JUUL Pods, instead flocking to fruity flavors like the ever-popular mango.

Vaping often turned into a communal activity, passing the JUUL around and by consequence introducing exponentially more teenagers to the device. Because of the JUUL’s radical departure in design from previous e-cigarettes, which were shaped more like their analog counterpart, it took a while for many school administrations to catch onto the problem, with teachers often assuming the JUUL to be a flash drive or some other unrelated device – and by the time schools did catch on, it was already too late.

The Future of Teen Vaping – A Dying Trend?

Every year since the JUUL first hit the market, the percentage of nicotine users among high school students only grew larger and larger. According to the National Institutes of Health, 21% of high school seniors reported they had vaped nicotine in the last 30 days in 2018, up from 11% the previous year. Every year since then saw these numbers steadily increase, with the 2019 National Tobacco Use Survey reporting that over 27% of high school students had vaped nicotine in the past month – that was until, surprisingly, last year. According to the CDC, just under 20% of high school students reported vaping in the last month in 2020, a significant drop from the previous year. It seems that parents becoming more aware of the issue, along with the negative press around respiratory illness from vaping that became a popular topic in 2019, as well as the pandemic possibly making access to these devices more difficult, have all contributed to this encouraging drop-off in teen vaping. It remains to be seen if this decline will continue, or if it is only temporary, but it is possible that the massive negative impact JUUL had on teen nicotine usage has finally begun to fade away.

Vaping, in addition to causing respiratory illness, can also be part of a larger issue with substance use and addiction. If you’re concerned about your child’s vaping or suspect they may be dealing with a larger substance abuse issue, please contact us for a consultation. Our compassionate team of care coordination experts is here to help ensure a safe and happy future for your teenager.